WARSAW MUMMY PROJECT – DID CANCER EXIST IN THE ANCIENT WORLD? 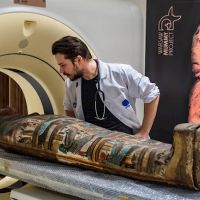 This interdisciplinary science project, launched in Affidea Polska’s Otwock Centre, explores the secrets of the unopened sarcophagus of an ancient Egyptian mummy and 41 other artefacts and has captured the imagination of thousands across Europe and the world. The project, which has attracted prime time TV coverage in Poland and even been featured on the BBC news website, sees teams of scientists working with modern diagnostic and investigative techniques, such as CT and fingerprinting, to discover some of the health secrets of the ancient leaders.

The first stage of the project saw the mummy undergoing a CT scan at Affidea Otwock’s state-of-the-art centre, which allowed scientists to discover a degenerative spinal condition previously undetected in smaller studies, without putting its conservation status at risk.

„The project has attracted considerable attention in the Polish media, with TV coverage lingering on the journey of the sarcophagi to the Affidea Oncology Center in Otwock under armed guard."

ANOTHER FIRST - VETSCAN OPENS IN HUNGARY